On Sunday, Aldeburgh Documentary Festival will host a discussion that follows a screening of the acclaimed documentary ‘GAZA’, a film about Palestinian lives in the besieged enclave. Extraordinarily, the panel is advertised to include the CEO of the UK’s biggest pro-Israel public relations group, BICOM (British Israel Communications and Research).

Clearly something has gone very awry with programming principles at Aldeburgh DocFest.

Below, journalist and author Sarah Helm who has been reporting from Gaza during the ‘Great March of Return’ protests, describes how she was invited, and then disinvited, from the GAZA panel at Aldeburgh DocFest. Her statement gives an indication of the confused and troubling logic at work behind the scenes.

It can never be appropriate or ethical for an independent cultural organisation to provide a platform for a PR company for Israel that is overtly complicit with the oppression of Palestinian people.  Filmmakers and audiences deserve better.

Artists for Palestine UK urges the festival programmers to get in touch, so that we can help connect Aldeburgh DocFest with one or more of the knowledgeable Palestinian artists, writers and speakers in the south of England who could enrich a proper discussion about Gaza, with reference to their own lived experience.

“I’m the journalist “unplatformed” from the Aldeburgh DocFest screening of ‘Gaza’. The festival is this week-end. I was invited to be in a panel to discuss the documentary.

In the 1990s I was Jerusalem correspondent for the Independent and visited Gaza often. Since then I have worked in Gaza as a freelance for the Independent, Sunday Times, The New York Review of Books, Newsweek and the Observer, most recently spending three weeks there for The Sunday Times this summer when I wrote a piece about the border sniper shooting for The Sunday Times. When in August Jill Green, the DocFest organiser, invited me to join a panel to discuss the Gaza film, I naturally was pleased to accept.

But Ms Green then emailed me about a month or so later to say she was “embarrassed” to tell me that I was no longer invited because it had been decided the panel would not be “balanced” if it had me on it. She said she “knew my views” and had to have a more ‘balanced panel”.

The decision to “uninvite” me was particularly unsettling for me as I am currently working on re-erecting the lost stories of Palestinian refugees, whose stories have been buried or ignored over the years.

According to the DocFest program published on line, the “balanced” panel is now three men, one a representative of BICOM, the UK’s main pro-Israel lobby.

From details published there is no Palestinian voice on the panel and no woman and nobody who has recently spent time inside Gaza.

There is little doubt the organisers were pressured into removing me and it is extremely disappointing that a cultural event such as this should feel obliged to constitute a panel according to political calculations and pressures about what constitutes “ balance” – which is a highly tainted value judgement in any event. I pointed out to Miss Green that my views are based on painstaking in depth research over many years and I was surprised she knew what my views were as I am still formulating them.

My last book on a Nazi concentration camp for women won The History Today prize in 2015 and was not accused of being unbalanced.

Ms Green did not reply. By the time the panel chair emailed to say I could come along to the event in any case, I had made other plans.”

The letter  below criticises the UK government’s shameful ‘hostile environment’ policy, as it impacts  on artists, and in particular artists from Gaza. Israel’s policies have brought Gaza to the brink of economic, social and ecological collapse. To refuse visas to individuals who use all their efforts to be productive and creative in the face of dire circumstances, largely brought about by Israeli policy, makes the UK an accomplice in a strategy of collective punishment.
*UK-based academics and artists can sign the letter here.*

END_OF_DOCUMENT_TOKEN_TO_BE_REPLACED

In our letter published in the Guardian yesterday and copied below, 20 British filmmakers and writers including Mike Leigh, Leila Sansour, Ken Loach and Prahitbha Parmar criticise the hosting of an Israeli government sponsored film festival in the UK.

END_OF_DOCUMENT_TOKEN_TO_BE_REPLACED

Gaza – the war against culture

On Thursday, 9th August, at around 17.45, Israeli drones began firing missiles at the Sa’ed al-Mishal Cultural Centre on Aydiyia Street in al-Rimal neighbourhood, west of Gaza City.  The 5-story building which housed the centre was completely destroyed.

END_OF_DOCUMENT_TOKEN_TO_BE_REPLACED

April 5, 2018May 17, 20187 Comments
Artists for Palestine UK is dismayed that despite the unlawful and calculated* massacre of 21  people (to date) during the march by refugees trapped inside Gaza – it appears that the duo that make up British trip-hop outfit Morcheeba, are set to entertain audiences in Tel Aviv next month. As we make our letter to Morcheeba public, we still hope that Skye Edwards and Ross Godfrey will connect with Palestinian artists or organisations, or indeed with ourselves, before proceeding with business-as-usual under this deeply racist and brutal Apartheid regime.
*According to NGOs Human Rights Watch and B’tselem

END_OF_DOCUMENT_TOKEN_TO_BE_REPLACED 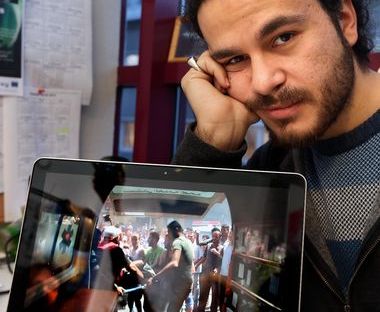 The Norwegian Directorate of Immigration (UDI) and the Norwegian Immigration Tribunal have refused to grant Palestinian film-maker Mohamed Jabaly a work visa to allow him to tour with his first film, Ambulance (2016), and to make a second film with his Norwegian producers, in Tromsø, Norway. Artists for Palestine UK (APUK) is shocked at this decision, calls on the Norwegian government to rescind it, and invites others to join in this call.