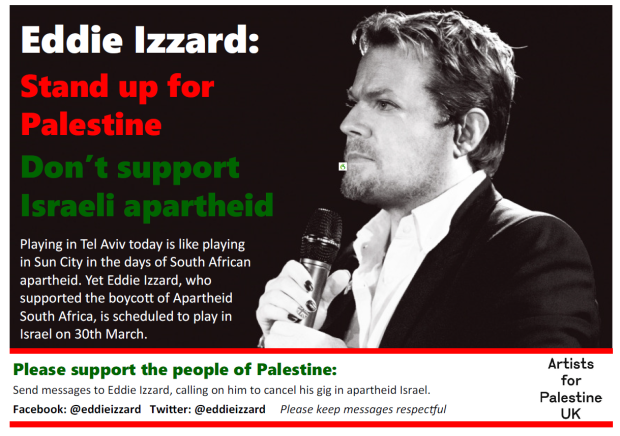 UK comedian Eddie Izzard is known for his opposition to apartheid South Africa. He played gigs for the Anti-Apartheid Movement in the 1980s. In 2016, as part of a charity fund-raising effort, he ran 27 marathons in 27 days to honour the 27 years Nelson Mandela spent in prison . And yet, despite pleas from fellow artists in the UK and Palestine, he is scheduled to perform in Tel Aviv on March 30, in breach of the Palestinian boycott which challenges Israel’s continuing Apartheid regime.

On Friday (March 17) campaigners from Artists for Palestine UK handed out leaflets and spoke to fans attending an Izzard gig at the Soho Theatre in central London. Many were shocked to hear that a performer admired for his principles seems intent on ignoring the call from Palestinian civil society, to refrain from doing “business as usual” with the state of Israel as long as Palestinian rights are denied.

Disappointed fans are calling on Izzard to take a stand by cancelling his gig in Tel Aviv, because Israel carries out many acts that are prohibited by the UN Apartheid Convention including:

Since 2004 Palestinians, including artists and cultural workers, have called for Boycott, Divestment and Sanctions (BDS) as a non-violent way of putting pressure on Israel to address the legitimate grievances of the Palestinians and to end its apartheid policies.

Thousands of artists around the world have pledged to show their solidarity with their Palestinian peers, including 1,200 UK artists who have pledged ‘…to accept neither professional invitations to Israel, nor funding, from any institutions linked to its government until it complies with international law and universal principles of human rights.’

Campaigners will be at the Soho Theatre again on Saturday evening, asking Eddie Izzard not to play Israel’s Sun City.

Eddie Izzard is appearing in Cardiff on March 20th, Edinburgh March 22nd and Manchester March 23rd. If you are planning to attend, please download a printable flyer to ask Izzard and his audience to take a stand.